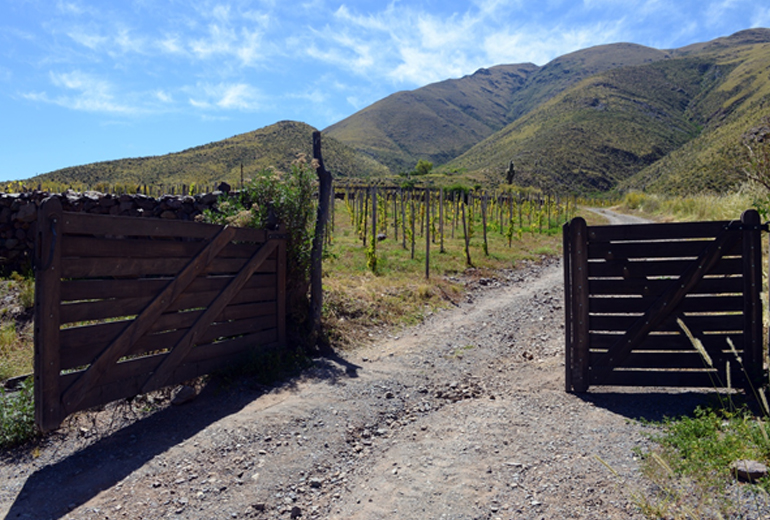 Where Are the Top 3 Wine Regions Located in Argentina?

THE LAY OF THE LAND

When I planned my first trip to Argentina, I found it very difficult to really understand where the wine regions, specifically.  Yes, they are in Mendoza; however, Mendoza is a state, and a City (like NY, NY).  That would be analogous to calling California a wine region, when it would be more accurate to say Napa Valley is a wine region.  This is the same in Argentina.

I did significant Google searching.  Looked at map after map after map.  The problem is that the vineyards are all over the place.  I needed to know what was significant and interesting.  I asked many people who have been to Argentina, especially people who live in the wine regions of Argentina… where are the wine regions located in Argentina?  I would still get vague answers.  When pressed, I would get… well, the wine regions are to the west of Mendoza city, and to the northwest and the south and southwest.  While all of this is true, it just doesn’t tell you enough to plan something good.  And when I travel, I am always seeking very good, and great!

Vintners, winemakers, sommeliers and chefs, for example, do what they do well… make great wine, create delicious foods and formulate amazing food & wine experience.  What I do well is communicate all these, and that is why I produced the book Exploring Wine Regions – Argentina, so anyone can figure out how to have an extraordinary insiders experience in the wine regions of Argentina.

The Top Wine Regions in Argentina 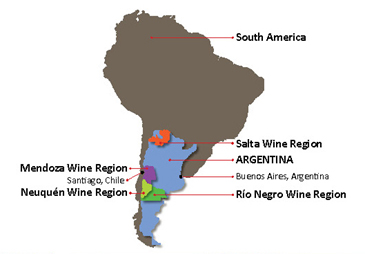 In Argentina, there is more than just Mendoza for great wine.  Argentina, the second largest country in South America, is made up of three primary wine regions spanning the western edge of the country… Salta in the extreme northwest of Argentina, Mendoza is central and Patagonia to the south; all three regions running along the eastern edge of the Andes Mountains.

Salta and Patagonia are about 600 miles north and south of Mendoza, respectively.  With mountainous roads, expect 15 hours or more for driving times from Mendoza.  Flying your own private aircraft is the most efficient solution.  Commercial airlines have no direct flights, so you must fly through Buenos Aires, back and forth.  From Santiago Chile and Buenos Aires, there are daily flights to Mendoza.  From Buenos Aires, there are daily flights to both Salta and Patagonia. 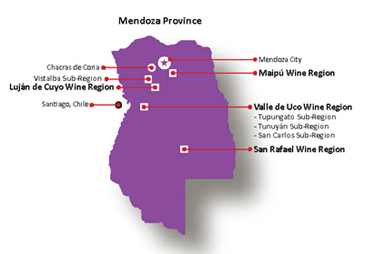 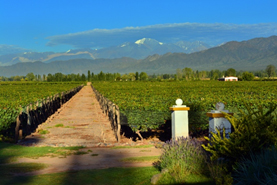 The city of Mendoza is the capital of the Mendoza Wine Regions, of the Mendoza Province, with roughly two-thirds of the region’s population living in the big city of a million people.  Enjoying downtown is an easy stop, with the Mendoza Airport (MDZ) just 20 minutes from downtown, located on the northeast edge of the city. 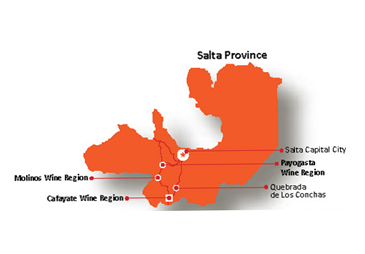 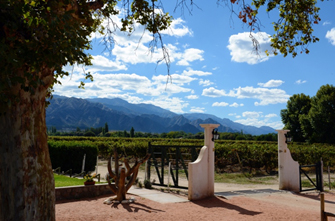 Salta is a state, also the capital city of the province, located in the far northwest of the country at high elevations in the foothills of the Andes Mountains 600 miles north of Mendoza and bordering Bolivia, Paraguay and Chile.  This is Argentina’s second largest wine region becoming famous for its unique grape… Torrontés.  Another unusual grape grown here is Tannat.  Plus they grow Argentina’s notable Malbec, in addition to Merlot and Cabernet Sauvignon.

In all of Argentina, Salta is considered the city which has preserved its colonial architecture the best.  Nicknamed Salta La Linda (Salta the beautiful), it has become a major tourist destination due to this old and restored colonial architecture.  Salta is the city you must fly into in order to venture out to the wine regions.  It has a population of 600,000 and an elevation of 3,780’ with many exciting tourism opportunities.  Since the wine regions are at least two hours away, you might as well explore Salta for a day or two on your way.

Salta is considered the highest altitude wine-growing region in the world averaging 5,500 to 6,500 feet elevation in Cafayate, 7,500 feet in Molinos and exceeding 10,000 feet in Payogasta.  Salta is growing an exciting newer varietal originating in Argentina: Torrontés, nicknamed The Liar because of its beautiful floral sweet nose, then a surprise of a crisp dry finish on the mouth of apricot, peach and grapefruit.

To get from the city of Salta to the town of Cafayate (the primary wine region of Salta), you drive about 120 miles southwest on Route 68 through some very picturesque landscapes.  The road is mostly paved and well maintained when hard-packed dirt.  Both Salta and Cafayate are in valleys, Lerma and Calchaquí respectively, divided by a mountainous region known as Quebrada de las Conchas.  It is a scenic drive leaving Salta through the valley of Lerma, a green subtropical highland climate, traversing through the dramatic scenery of Quebrada de las Conchas, and then into the Cafayate valley of Calchaquí, a dry desert climate.

Cafayate is located in the southern most part of the Salta Region in the Calchaquíes Valley and is the primary wine growing region in Salta with roughly 35 wineries, most are small family operations.  Cafayate is a quaint little colonial town with a population of only 12,000 people.  It has a lively square in the center of town, nice restaurants and a very interesting museum about this wine region.  Being only eight square blocks, you can easily stroll around and visit the shops, restaurants, church, and the 10 or so wineries located in the town. 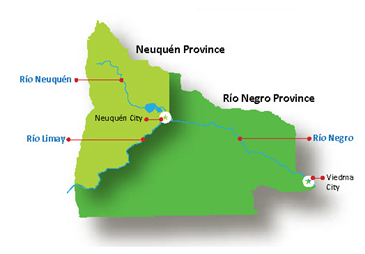 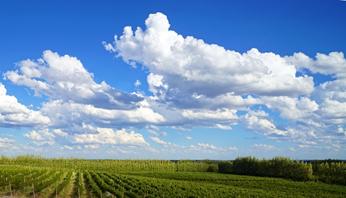 Patagonia encompasses the extreme south of the American continent, mostly in Argentina, and represents more than a third of the land mass of Argentina.  Argentine Patagonia consists of many provinces (states) among which Neuquén and Río Negro are located at the northern edge of Patagonia.  Neuquén borders the province of Mendoza (Argentina’s primary wine region) directly to the south along the Andes Mountain Range.  Río Negro is to the east and south of Neuquén extending all the way to the Atlantic Ocean.

The wine regions of Patagonia are located in Neuquén and Río Negro, and La Pampa.  The vineyards are clustered primarily in the areas where the two provinces come together in their north, far from the Andes Mountains, and where the two rivers of Limay and Neuquén merge to become the Río Negro.  Different from the Mendoza and Salta Wine Regions, the Patagonia Wine Region is far away from the Andes Mountains at a much lower elevation of 850’.  Being far away from the Andes, this region does not get snow, nor the devastating effects of summer hail.  When you see leaf damage in the vineyard, this is from the intense winds. 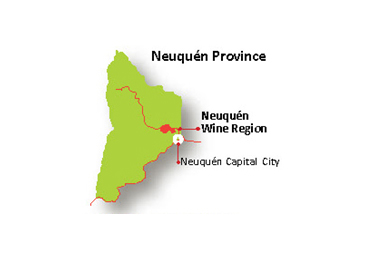 Neuquén, the capital city of the Neuquén province, is central to the Patagonia Wine Region, also the largest city in both provinces of Neuquén and Río Negro.  With its size and fast growth, comes many things to do and see in and around the downtown area.  There are some fantastic restaurants too.  And, downtown Neuquén is a beautiful walking community.  Tree-lined streets with extra large walking areas, parks, shops, restaurants, art galleries, museums, and an active night life.

The world’s newest wine region has recently been born in Neuquén!  Not that long ago, at the turn of the century, the concept of a brand-new wine region was realized by planting 5,000 acres of Patagonia desert with grapevines into a terroir that would produce exclusively top-quality, premium wines.  Today, there are five wineries producing more wine than the rest of Patagonia combined.  All five wineries are located on the north side of Río Neuquén, 37 miles northwest of the city of Neuquén, next to the small village of San Patricio del Chañar, on Ruta 7.  The wineries are all practically next to each other, making them easy to visit. 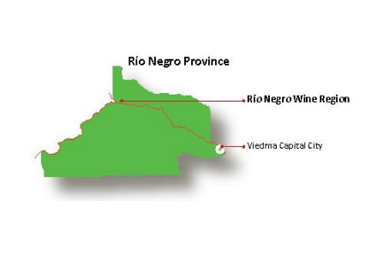 Río Negro is the world’s southernmost wine region. Río Negro is both a province (to the east and south of Neuquén) and a grand river which flows from Neuquén 310 miles to the Atlantic Ocean, creating three agricultural regions in its route. The Río Negro river is formed at the convergence of the Río Neuquén and Río Limay (at Neuquén city near the Neuquén wine region), and is divided into Alto Valle (high valley) at the beginning of the river, Valle Medio (middle valley) near Choele Choel, and Valle Inferior (lower valley) at the end of the river where it flows into the Atlantic Ocean.

Alto Valle is the most prosperous part of the province with the predominance of the pear and apple plantations, plus most of the wineries and vineyards are here as the General Roca Appellation of Río Negro. Ruta 22 runs though the middle of this valley, giving easy access to all the wineries. Being the cooler Patagonia climate, elegant styles of Pinot Noir, Sauvignon Blanc, Merlot, and Malbec are the primary wines produced here.

The Río Negro Alto Valle is 12 miles wide with the Río Negro river flowing along the southern edge of the valley, and the main canal runs along the north. In between are the numerous vineyards and orchards, with Ruta 22 connecting the cities and town of this wine region. For Argentina, the 800’ elevation on the valley floor here is unusually low for vineyards of the typical high elevations along the Andes Mountains. General Roca is centrally located in the valley, and it is the largest town (population 86,000), offering an ideal location for your hotel stay.

Malbec In The Argentina Wine Regions 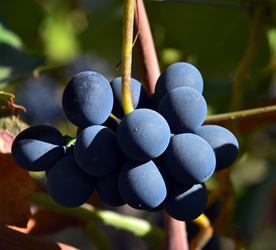 Malbec is Argentina’s flagship wine, and the country has the largest Malbec acreage in the world.  This grape originally came from France as a Bordeaux varietal.  In 1852, Malbec was brought to Argentina by Michel Pouget, a French agronomist who was hired by the Argentine government.  When phylloxera destroyed the French viticulture toward the end of the 19th century, Argentina became the only country to have the original Malbec vines of true French heritage.  Malbec more than adapted to Argentina’s terroir, it thrived, and winemakers began to produce wines better than in its original land.  Argentina is now the main producer of Malbec in the world, with 78,000 acres of vineyards planted across the country, far surpassing France with 13,000 acres.

In Argentina, Mendoza has 85% of all Malbec vineyards with 66,000 acres. San Juan ranks second with 7,000, followed by Patagonia with 2,200, Salta with 1,700 and La Rioja with 1,200.  In Mendoza, Luján de Cuyo trademarks their region as Tierre Malbec, and was the first Denomination of Origin of the Americas.  Malbec from Luján de Cuyo has an intense, dark cherry red color, which may look almost black.  It shows mineral expressions, with black fruit and sweet spices standing out.  In Mendoza’s Valle de Uco, Malbecs from Tupungato, Tunuyán and San Carlos are more elegant and display distinctive spicy and floral notes.  Valle de Uco is the “new frontier” where much of the growth in new wineries and tourism is occurring in Mendoza.

In the north, Salta (Cafayate and Catamarca) is a land of sun and high altitude.  Malbec from this region expresses a different personality: aromas of very ripe red and black fruits, black pepper and paprika, with a very solid structure of solid, sweet tannins.  In the south, the climate in Patagonia (Neuquén and Río Negro) is slightly colder and altitudes are less extreme, which leads berries to retain acidity, yielding wines with notes of ripe black fruits in combination with a marked mineral tone.

Written by Michael C. Higgins, PhD, author/photographer of Exploring Wine Regions – Argentina, a 352-page travel guide, which details an insider’s perspective to Argentina’s wine regions with more than 500 beautiful color photographs.  If you love wine, make the time to go to Argentina.You are going to have a wonderful time for sure!

0
0
Your Cart
Your cart is empty
Continue Shopping